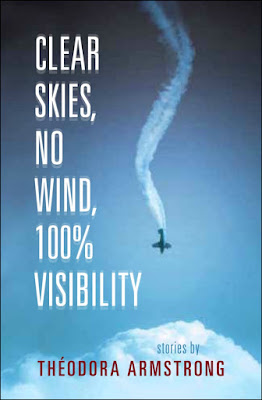 Set against the divergent landscape of British Columbia — from the splendours of nature to its immense dangers, from urban grease and grit to dry, desert towns — Clear Skies, No Wind, 100% Visibility examines human beings and their many frailties with breathtaking insight and accuracy. Théodora Armstrong peoples her stories with characters as richly various — and as compelling — as her settings. A soon-to-be father and haute cuisine chef mercilessly berates his staff while facing his lack of preparedness for parenthood. A young girl revels in the dark drama of the murder of a girl from her neighbourhood. A novice air-traffic specialist must come to terms with his first loss — the death of a pilot — on his watch. And the dangers of deep canyons and powerful currents spur on the reckless behaviour of teenagers as they test the limits of bravery, friendship, and sex.

“The stories in this collection are a rare phenomenon...

this is a superb debut.”

– Steven Galloway, author of The Cellist of Sarajevo